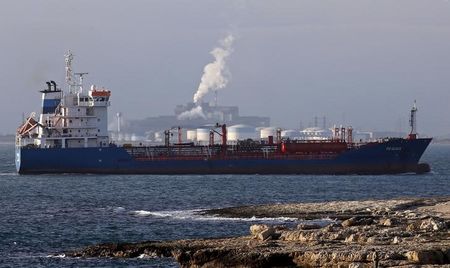 TOKYO, July 1 (Reuters) - Oil prices rose on Wednesday after
an industry report showed crude inventories in the United States
fell much more than expected, suggesting demand is improving
even as the coronavirus outbreak spreads around the world.
Brent crude LCOc1 rose 33 cents, or 0.8%, to $41.60 a
barrel by 0044 GMT after declining more than 1% on Tuesday. U.S.
crude was up 42 cents, or 1.1%, at $39.69 a barrel, having
dropped by 1.1% in the previous session.
U.S. crude and gasoline stocks declined more than expected
last week, while distillate inventories rose, data released by
the American Petroleum Institute (API) late on Tuesday showed.
API/S
Crude inventories dropped by 8.2 million barrels to 537
million barrels, against analysts' forecasts for a draw of
710,000 barrels.
"If the API estimates are vetted by the official government
agency data due out tomorrow, this will be viewed as a definite
bullish signal," said Stephen Innes, chief global markets
strategist at AxiCorp.
"The reports could go a long way to easing some of those
lingering inventory concerns," he said.
Inventory data from the U.S. government's Energy Information
Administration is due out later on Wednesday.
Still prices are likely to be capped, analysts said, as the
world is awash with oil after the coronavirus caused demand for
fuel to drop by around a third.
A Reuters poll of analysts indicated that oil prices will
consolidate at around $40 a barrel this year, with a recovery
potentially picking up in the fourth quarter. The virus continues to spread around the world with ever
increasing rates of infection. Cases now total more than 10
million with more than half a million people dying after
catching COVID-19.