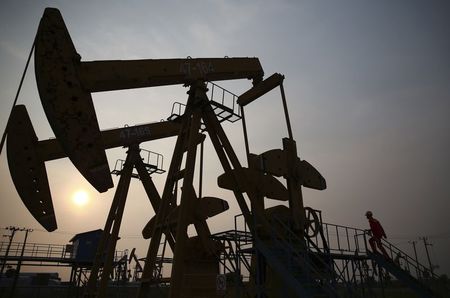 (Updates throughout)
By Jessica Resnick-Ault
NEW YORK, Sept 17 (Reuters) - Oil prices rose more than 2%
on Thursday, turning positive as OPEC and its allies said the
producer group would crack down on countries that failed to
comply with output cuts and planned to hold an extraordinary
meeting in October if oil markets weaken further.
After falling early in the session amid bearish jobs numbers
and a ramp up in Gulf of Mexico oil output following Hurricane
Sally, crude benchmarks reversed course to gain on the day,
bolstered by comments from OPEC.
"Although no amendments to the current supply-cut deal have
been proposed by OPEC+ today, the producers group gave the
impression that it does not sweep troubles under the carpet,"
said Rystad Energy's Head of Oil Markets, Bjornar Tonhaugen.
Brent oil futures LCOc1 extended gains to settle up $1.08
or 2.56% at $43.30 a barrel. U.S. crude futures CLc1 settled
higher by 81 cents, or 2.02% at $40.97 a barrel. Both contracts
rose more than 4% on Wednesday.
The panel of major producers, including Saudi Arabia and
Russia, did not recommend any changes to their current output
reduction target of 7.7 million barrels per day (bpd), or around
8% of global demand, according to a draft press release and an
internal report. The panel pressed laggards such as Iraq, Nigeria and the
United Arab Emirates to cut more barrels to compensate for
overproduction in May-July, while extending the compensation
period from September to the end of December, according to three
OPEC+ sources. "They were coming down hard on the UAE," said Phil Flynn,
senior analyst at Price Futures Group in New York. The
expectation that output could fall as the UAE and others trim
production bolstered prices, he said.
The OPEC news overshadowed the restart of U.S. offshore
production after Hurricane Sally passed through the Gulf of
Mexico and bearish U.S. economic news.
U.S. energy companies were starting to return crews to
offshore oil platforms in the Gulf of Mexico after Sally halted
operations for five days, shutting down nearly 500,000 bpd of
output.
Prices were also under pressure from the slow economic
recovery from the pandemic.
Global coronavirus cases are expected to pass 30 million on
Thursday, according to a Reuters tally. The U.S. Labor Department's report showed the number of
Americans filing new claims for unemployment benefits fell last
week, but remained at extremely high levels as the labor market
recovery shifts into low gear and consumer spending cools.