Oil news is slow in the aftermath of last week’s OPEC+ meeting, but there are four issues oil traders should be looking at this week.

Even though lockdowns have upended oil markets, supply and demand continue to follow similar seasonal trends as they did before the coronavirus. 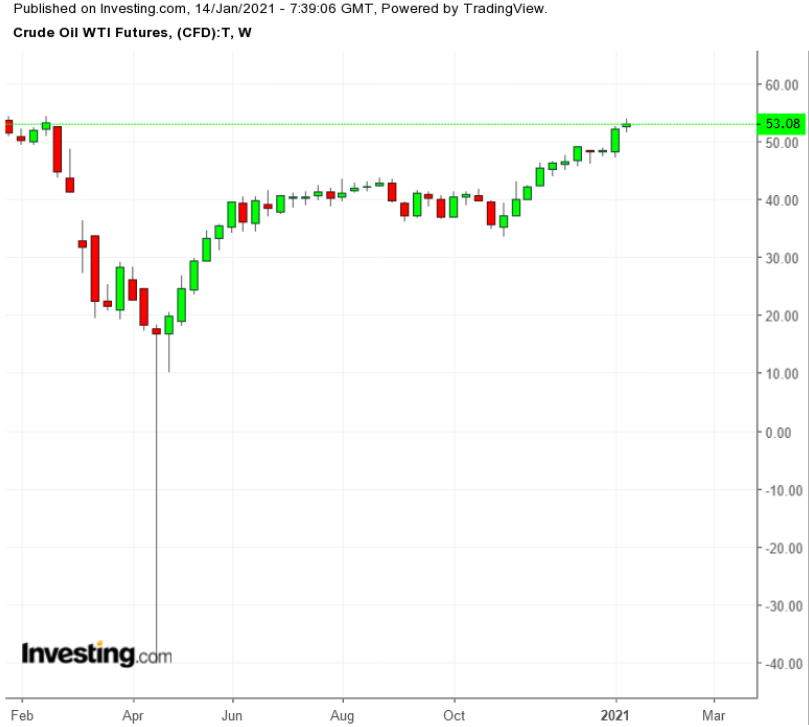 Oil demand is a good example of this. One way to judge oil demand is to examine refinery usage of crude oil in the United States. January is generally a period of high crude oil demand as refineries run at high capacity to produce gasoline and other fuels and products.

So far, 2021 looks like it is following similar demand patterns in the United States.

2. Cold Snap in Europe and Asia

A wave of extremely cold weather hitting Asia and Europe is causing natural gas prices to increase, especially the price of LNG to Asia. Difficultly getting enough natural gas to provide heat and power is forcing power plants in Asia to turn to coal and low-sulfur fuel oil to take up the slack.

This is even causing natural gas prices in the U.S. to rise. In addition, weather forecasters are predicting that the U.S. Midwest will soon experience a polar vortex with cold temperatures that could also affect the mid-Atlantic region.

Traders may recall that in January 2018 the northeast U.S. experienced a polar vortex that caused a spike in natural gas prices. This was the result of bottlenecks due to insufficient pipeline capacity to the New England region, which then went on to impact parts of Canada as well.

Power plants were forced to burn coal and oil to produce power and even import liquefied natural gas from Russia. This situation is unlikely to be reproduced in the Midwest because that region does not suffer from the same pipeline situation that was present in New England, but it is worth keeping an eye on natural gas supplies to the Midwest, especially now that more U.S. natural gas is being liquefied and shipped overseas.

3. Are Crude Oil Stocks Falling or Not?

This week’s EIA report showed that crude oil inventories in the U.S. dropped by 3.2 million barrels last week—the 5th straight week that inventories have dropped. At the same time, stocks of gasoline and distillate grew. That is normal for this time of year.

Prices initially rose on news of the crude oil draw, but they then pulled back. Perhaps the market was sobered, in part, by a statement from OPEC’s Secretary General, Mohammad Barkindo, about the state of gloabal crude oil stocks. On Wednesday, he said both OECD and non-OECD stocks of crude oil are “currently very high.”

OECD oil stocks are 160 million barrels above the five-year average. So, while markets may be temporarily excited by crude oil stock drawdowns in the U.S., three million barrels is just a drop in the bucket compared to the global situation.

Saudi Arabia}} claimed that its “surprise” 1 million bpd production cut at last week’s OPEC+ meeting was designed to help draw down these very high levels of stored oil. Traders should keep an eye on whether Saudi Arabia’s production cut actually does have an impact on global crude oil stocks or whether it was merely a cosmetic move.

4. 2021 Oil Market Forecasts Still All Over the Place

Goldman Sachs predicted this week that {{8833|Brent will hit $65 per barrel by this summer. Meanwhile, the EIA released a sober forecast of $53 per barrel as the average price for Brent in both 2021 and 2022.

On the other side, oil trading firm Vitol believes that weaknesses in air travel and jet fuel demand will impede a return to 2019 levels of oil consumption this year. In fact, Vitol’s forecasts were quite pessimistic and only sees jet fuel demand in Asia starting to recover in the third quarter of this year.

It is possible, however, that jet fuel demand weaknesses might not impede the overall recovery of oil demand as much as feared. This is because U.S. refineries are pivoting to produce less jet fuel per barrel of crude oil. They are even turning excess jet fuel into low-sulfur fuel for ships, which is in much higher demand than jet fuel. So, while air travel is an important indicator of overall oil demand, it may not be quite as important an indicator as it once was.

Few forecasts seem to consider the possibility of any major change in supply in the New Year or so.

Traders should remember that most of the organizations, individuals and companies making these predictions have vested interests in demand and prices going one way or the other. These predictions should be assessed with that in mind.